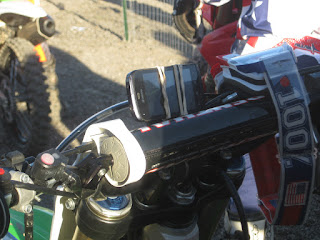 If you are a die hard Big Kid Powersports fan or are close to the inner circle, you know that we have been up to something.  We have been working with our riders and conjuring up this idea of running a LIVE video stream from their bikes at the races.  Now, we are not the pioneers in this field, but this is a pretty sweet idea.  A lot of riders run GoPro and other action sport cameras, but that footage can't be viewed LIVE by other viewers.  We ran our feed through our LiveStream.com account.  There is a slight delay, but this allowed us to view the footage LIVE while our rider was still on the track.  Not only can we view it, but EVERYONE can watch it as it is happening. 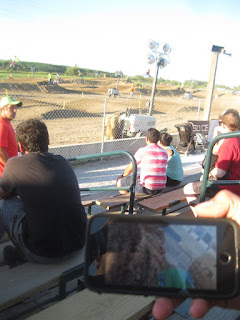 "Ok, that's kinda cool....so what."  Our plan with this feed is to give motocross fans a new angle to enjoy the race.  I sat with some fans in the crowd at the Lake County fair race last night as they watched the race in person AND had the footage pulled up on their phones.  There is just a 'cool' factor of watching the race in real life and enhancing it with the footage from the bike as it is happening.  The very short delay actually was helpful.  There were a few moments where you watched a rider have a great jump, or a close call and you could glance down at your phone and experience what the rider saw just moments earlier.

If you were out at the track, you saw the "privateer" apparatus that was mounted to our racers bikes. Since we are still in BETA testing with this idea, we are still dialing in some mounting and angle options.  We had one issue that was boarder line scary.  I told all my racers that the camera (my phone) had nothing to do with them.  It was my problem, ignore it, don't even think about it being there.  Well, there was one race that my mount almost became a problem.  While on Griffith's 65, the brake line came up and over the phone after some big air.  The hose grabbed the camera and mount and pulled it down hard.  Once back in the pits, we were able to see how tight the brake line had gotten and realized that this could have been a pretty significant issue.  Back to the drawing board on mounting areas. 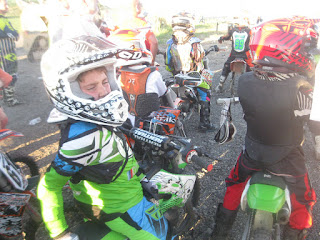 All in all, the LIVE feed from the bike was a great success.  We will be dialing it in and growing this idea for the upcoming races.  We had two objectives with the launch of this idea.  Be first and get a buzz.  We were first in local races to run a live video stream from a bike and there were racers talking about it in the pits.  So, in my book, it was successful.  Big Kid Powersports and their Live Feed.....it's official.  If you missed the live feed event, you can check out the archived videos from the race at https://livestream.com/accounts/14377803. It is raw footage, as it happened that night, so you will want to scroll around in the video to see some highlights.  Enjoy and stay tuned.
Posted by Big Kid Powersports at 5:45 AM No comments: 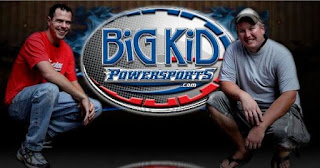 On the night of July 22nd 2015, an unusual storm threatened Northern Illinois.  Luckily, 2 unlikely dudes stepped up to the plate to save the community.  In Northern Illinois, there is a small community called Lakemoor, IL.  This town is home to one of the largest used powersports parts shops in the midwest.  Big Kid Powersports was the center of growing story this morning.  We spoke with owners Mike Missak and Doug Hein about their pretty crazy experience last night.  "It got really dark, really quick.  I didn't realize it was so windy until it was too late.", states Missak, "Luckily, we had prepared ourselves for a situation like this."

What Mike is referring to is categorized as a type of Micro burst by meteorologists.  A swirling, tornado like storm that is centralized over one area.  The storm cultivated over the Lakemoor parts shop at about 7.30pm Wednesday evening.  "Something felt unusual, but I just could not pinpoint what", reflects Hein.  Talking with Missak and Hein, you can tell that it was a traumatic incident.  Missak says that the storm quickly grew a funnel cloud and slammed straight down into the shop.  "The storm took all the parts out of the shop almost immediately", Missak states.  "Once it happen, we knew what we were dealing with", Hein adds.  "Partsnado", the heroic duo say in unison.  That's right, the powerful funnel storm, now known as "Partsnado" was littered with powersport parts and it was threatening the town.

"I armed my self with the impact wrench and Doug took a 10mm", Mike reminisces.  "We took to the roof and we parted the storm almost as quickly as it started."  Doug states that he was yelling, "Get some" and "not in my house" as the storm dissipated.

When asked about the damage the dudes proudly share that it was cleaned up late last night.  "People need parts and we need to be here for them", Doug says.

Missak and Hein are open for business and will gladly share their story with anyone that wants to hang out and listen.  It was a crazy night that, luckily, no one will ever know about.

Posted by Big Kid Powersports at 6:21 AM 2 comments: 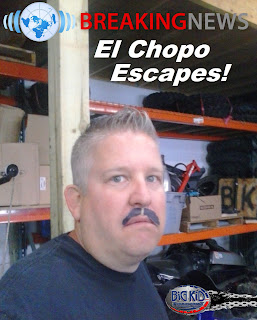 On the morning of Wednesday July 15, Big Kid Powersports found that El Chopo (pronounced Chop-O) had escaped from the chopping block area of the shop.  El Chopo is also known by his street name, The Butcher.  Big Kid Powersports has kept the public safe from El Chopo (other than an issue in 2009) and channeled his abilities into parting machines at their shop.  Rarely seen by the public, El Chopo is the backbone of the powersports company in Lakemoor, IL.

Early reports show that El Chopo used his tool of choice, a Sawsall, to cut a hole in the back of the shop.  He was last seen at lights out Tuesday evening about 6 pm.  When the store opened at 8.30 Wednesday morning, El Chopo was gone.  The public should not be concerned for their safety.  El Chopo is not considered dangerous to the public.  "We just want him back in the bay.  We need him." says one of the shop owners, Mike Missak.

Fellow owner, Doug Hein, says that the only situation that would be concerning would be if El Chopo began to negotiate.  He urges powersport sellers on Craigslist and the FB page, The MotoXchange to be aware that El Chopo is free and to not get into negotiations with him.  "He is a damn viking when it comes to negotiating....it's intense" says Hein.

Posted by Big Kid Powersports at 8:22 AM No comments: 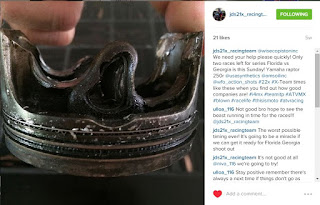 Surfing through posts on Instagram one day, I come across this piston that looks like it is from a Edvard Munch painting (that's the Scream Painting for you less artsy folks) and it grabs me.  I have seen busted, melted, pulverized, pistons before but the way the connecting rod twisted and pulled this piston at the wrist pin fascinated me.  After reading the caption of this carnage I realized what this situation really was.  JDS Racing, a family run race team with riders in the Midwest and Florida, was stuck in a pretty good stand still right before a pretty huge shoot out race.  There was an opportunity there.  An opportunity that was set up on the plate for Wiseco, but I was going to get in that door first.  I commented that Big Kid Powersports has a Wiseco 250r Raptor piston and could have it to Florida the next day so the Raptor could be assembled and back at the track for the weekend.  We had about 4 days to get this piston to these guys so they could assemble a motor overnight and be at one of the largest MX4 races in the south.  They crushed it at the race that weekend and mangled up the 250 pretty good again.  No worries, Big Kid's have it covered.  Overnighting more parts to get them into the final race night so they could end the season 2nd in points.

Our relationship with JDS Racing has grown and they are now our sponsored riders. Travis, Jason, and Marissa are great riders and have an awesome following on Social.  We are stoked to have them carry the Big Kid name and we can't wait to see where they go in the future. 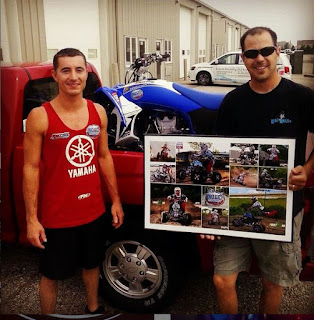 Posted by Big Kid Powersports at 7:38 AM No comments:

How it's Made; FMF Exhaust 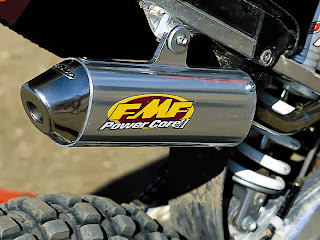 FMF Exhaust will be on the Science/Discovery Channel's "How it's Made" tonight at 9pm est.  FMF exhaust systems are all hand made in California, so it should be a pretty cool segment to watch.  Set your DVR for tonight!

http://science.discovery.com/tv-shows/how-its-made/tv-schedule.htm
Posted by Big Kid Powersports at 3:07 PM No comments:

Live streaming video by Ustream
Posted by Big Kid Powersports at 10:54 AM No comments: